We live in a world of indifference. Where the ones that are ‘different’ are pushed away. What can be done to make the world a better place, for everyone? What can you do to make difference, to be civilly courageous?

The reason I came to think about this was that about a month ago we had Harvard professor Brian Palmer lecture at the high school I attend. He talks about how some individuals voluntarily risk their own lives to help others in need or stop something they think is wrong, this is called civic courage. He brings up many examples of such courageous people with the first being about a man in China who stood in front of moving tanks in 1989 as a sign of disagreement.

“They have the answer to the riddle of the Sphinx.”
– Brian Palmer

Other brave individuals are Malala Yousafzai, Sophie Scholl, Hans Scholl, Witold Pilecki, and many more we don’t know the names of. Who all did incredibly courageous things for the greater good, often to make it known what horrible things was/are happening in the world. They knew the risks of the acts they took but still took them. If you want to learn more about these heroes there is a link to Palmer’s lecture below. It’s incredibly inspiring, I highly recommend you watch it. In his lecture Palmer says that he is a very anxious man. He worries about the smallest things such as what would happen if he forgets to floss his teeth. He said that this is probably the reason why he found these people so interesting.

”To be human is to suffer for others, god help us to be human.”
– Cesar Chavez 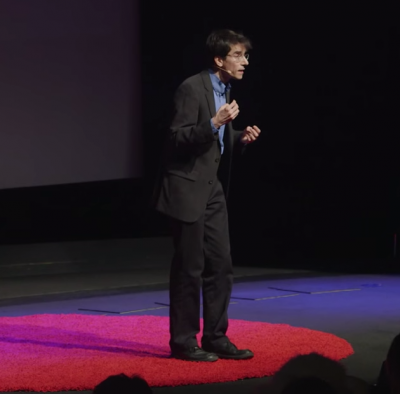 After this lecture the students received an assignment on the subject of civic courage. The assignment was that we would choose an task that would make difference from a Swedish website called http://goraskillnad.nu/ (English: Making Difference . Now) and then perform it. On the website there’s a list of 100 tasks you can do to make difference where you live. Some of them are really simple such as just bringing up the discussion of change, but some are a bit more challenging but make a bigger difference, like for example hosting an event to collect money for a good cause, charity. I think this is great because even the smallest tasks make the world better in a small way, some might think they have better stuff to do. I respect that, but if everyone thinks that way the world would go downhill very quickly. It is bad as it is, let’s not make it worse. There are of course valid reasons that you are unable to do this though, perhaps if you have difficulties getting food on the table every day. Then you are the one in need of help.

”Courage can be almost as contagious as fear.”
– Brian Palmer

Since I was young I’ve always wanted to help people, though I’ve always been too scared and worried about getting hurt. One time, when I was very young, I had a thought. I thought that if someone came into the classroom with a gun and threatened to kill someone. I would take the bullet, I would die a hero. Although, I would probably never do such a thing, I am too scared.

One way of helping people is to put your own life in danger for others, like the Doctors Without Borders. But there’s another way to help people, that might be fitting for us individuals with more anxiety, like myself. That way is doing what Palmer does with his lectures, he teaches. Teaching others about what is going on, collecting money for charity, or bringing attention to something you think is in need of change. Even the smallest things count, like giving a piece of food to a homeless person, or listening to other people’s problems and try to help them. It doesn’t need to be difficult, it can just be a smile. I have a saying that one smile can light up a million more.

”One smile can light up a million more”
– Viktor Aronsson

Thank you for reading and I hope that you are inspired to make change! Here are some excellent resources that helped me write this article and are great to read/watch if you want to learn more. I highly recommend watching Palmer’s lecture. How you will make difference in the world?

Courage can be almost as contagious as fear: Brian Palmer at TEDxGöteborg

Göra Skillnad (English: Making Difference)That website is in Swedish but if you look around a bit on the internet I’m sure you can find a website like this in English, if not in your own language.

The man who stood in front of the tank in China