Shawshank Redeption is, according to community rations over on IMDB, the best movie to this date. And that is certainly not without reason, here’s why.

Authors note
This article/story contains spoilers for the movie Shawshank Redemption (1994). I recommend you watch the movie before reading this.

With incredibly well depicted characters, a well thought-out story, and last but not least, incredible actors that make the characters come to life, Shawshank Redemption has reached the top of the IMDB charts. But let’s go one step further, let’s break down the story and understand why it has worked so well.

The story of Shawshank Redemption is built around a man named Andy Dufresne, who is sentenced to serve two lifetimes in prison for the murder of his wife and her lover.

The movie starts out in court where a prosecutor explains what has happened. Whilst his voice is narrating the events and Dufresne cuts in now and then with a sense of despair in his voice, the scene switches between the courtroom, Dufresne in his car outside the house of his wife’s lover, and the scene just before his wife and her lover is murdered.

These three specific scenes are combined into one introduction scene depicting what type of person Andy is. As a viewer one starts to wonder if he is guilty or not. He has the motive, he was present at the location prior to the murder, but did he actually do it? That is a question that juggles around in one’s mind when watching. In court he seems cold, as the judge says, but I’d say that I see confusion in his void-like stare.

Not only does this scene introduce the character, it introduces the whole story. And the point of to return could not be more clear: “You strike me as a particularly icy and remorse man, Mr Dufresne. It chills my blood just to look at you. By the power rested to me by the state of Maine, I here by order you to serve two life sentences back to back, one for each of your victims. So be it!” And life as he knew it is gone, ripped away at the blink of an eye for a crime he may or may not have convicted. 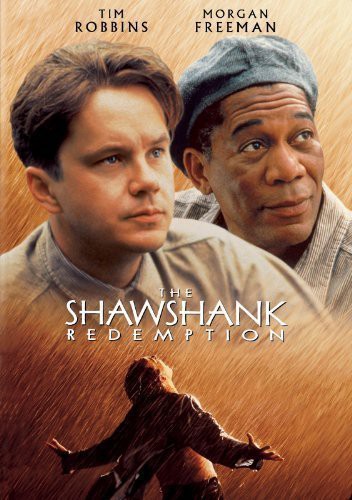 The Shawshank prison is a corrupt and horrifying place, even without its 1950-industrialized style. When the prison bus arrives, the inmates make bets on who of the “new fish”, as they call them, will break first. Among the “new fish” is Andy Dufresne.

Whilst the scene shows how Andy is being led into the prison and inmates yelling, we meet the narrator and a main character, Red. A man with already 20 years of prison time under his belt. He bets on that Andy will be the one to break first that night. But he is wrong, another new fish breaks. He cries for his mother, the inmates laugh and some mock him. He is pulled out of his cell by the brutal guard, beating him to the ground, kicking him, and finally ending his short prison time with a cracked skull.

From this point on we understand what type of prison this is, and how the guards treat the inmates. From this point, one knows that this mysterious, damp-looking prison is nothing but hell on earth.

From when the prison bus arrives to the prison, all the way till end, it is Red’s point of view we follow. He tells us about Andy, describes him in his behaviors, how he is, and how he reacts to different things. In fact, without Morgan Freeman’s narrating the story would lack the incredible depth it has, especially on the emotional front. 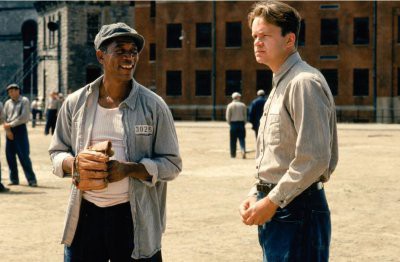 When Dufresne first gets to the prison, Red points out that he doesn’t look like he belong there. He looks sure of himself, fully adapted in some way. Yet distant when wandering through courtyard among the other inmates. But as his days at the prison turn into years, and years turn into decades, he settles. However the question remains, does he consider himself innocent? That is the theme that runs throughout the entire movie, as I mentioned before. Red is the only one of the inmates who think of himself guilty. All other simply say their lawyer screwed them over, the judge was bragged, or, as in Andy’s case, the cause is never spoken of. In fact, throughout the whole movie (spoiler warning) until the end we, as viewers, don’t know whether Andy committed the crime he was sentenced for.

As all inmates, Red and Andy becomes institutionalized. They forget about the outside world, how it is and even how to live it in. They become used to being told what to do, and always obeying. Then, once they are the once to decide, they become unsure. Prison has become their home, and they know nothing else.

When one of their friends, and old man, gets out of Shawshank he ends his life. He tries to adapt to the outside world, but it is just too different. When he was put it, cars barely existed, now they were everywhere. People stressing, rushing as if their lives depended on it. All he can think about is how to get back to the prison, how he can get back to his “normal” life. 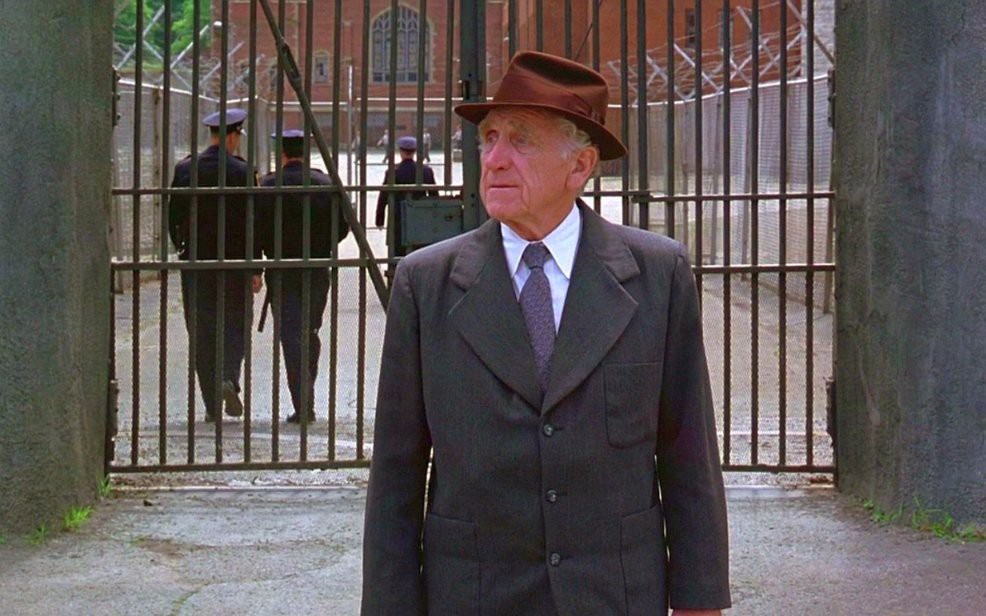 Andy’s and Red’s friend being let out of the main gate of the prison where he spent most of his life.

This institutionalization is brought upon Red as well. He is to be freed by a committee the inmates go to every decade after Andy escapes. He is let out, literally! They let him out of the main gate with some clothes and a small suitcase, after decades in prison (similar to when their friend is let out, see picture above). From that point, he is a free man, able to make his own fate. The only problem is that prison changed him, it changed everyone; Andy, their old friend, et cetera. One way or another they are all affected. They might not notice it while in prison, but once they get out it hits them.

Or actually, it is wrong of me to say prison affects everyone. It doesn’t quite effect Andy, only when he is in prison. But on the day (huge spoiler warning) he breaks out, he becomes the person he was before, just without a home and a job. It is as if he had a plan to escape this whole time, when he got there with the prison bus, when he was treated wrongly, when he did the taxes for the warden and for all the other guards, even when he built the library. All that time he had a small rock hammer and a poster on the wall, both from Red.

The night of the breakout, Red thinks Andy is going to kill himself. Andy’s life has taken a downturn with isolation for 2 months in a row. Why did he get 2 months of isolation you may wonder. Well, he learnt from another inmate about the guy who had committed the murders he was sentences for. He told the warden but he refused to help him. Instead Andy was sent to isolation for even arguing with him. Andy seems depressed and asked one of their friends for a rope just long enough to end his life. In his narrating, Red says it was the longest night of his life. 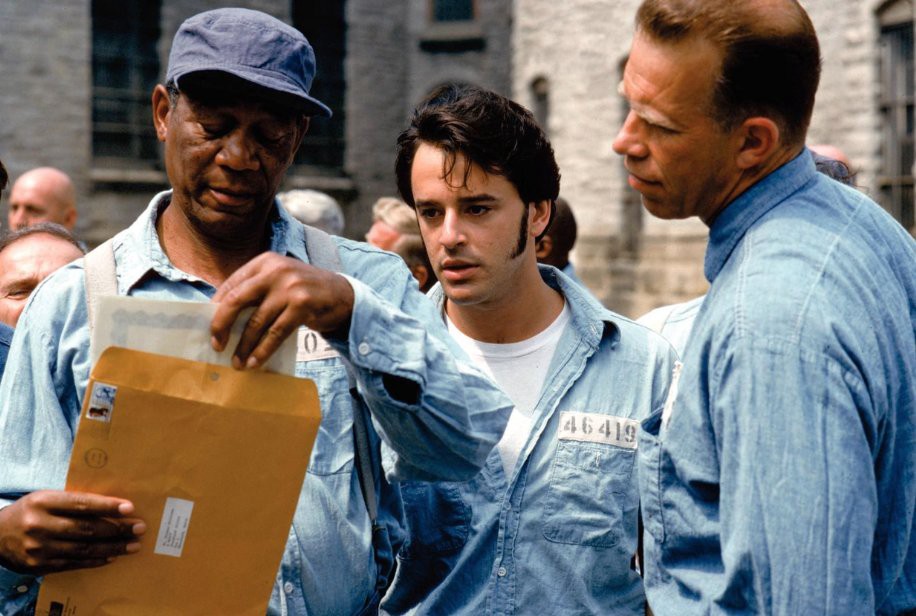 In the morning when the guards count the prisoners, Andy does not step out. They walk up to his cell to find it empty. At first they think he has just disappeared, untraceable for he was counted in the night before.

Now comes my favorite scene. They bring Red into the cell and ask him if he knows anything. The warden becomes angry as always and throws one of the chess pieces Andy crafted to the wall. It flies through the poster and continues through something that took 19 years and a small rock hammer. 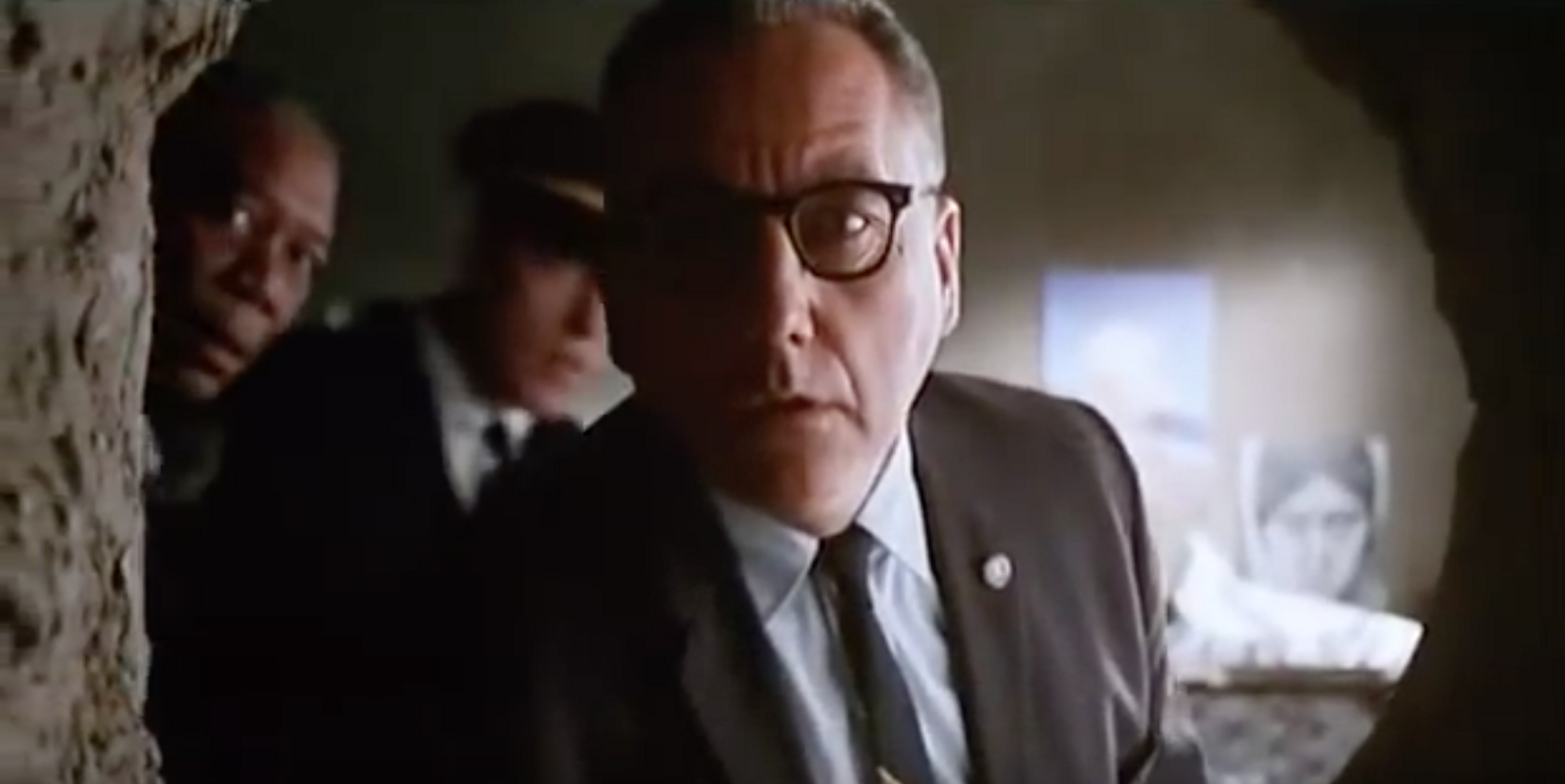 I mentioned how everyone except Andy changes when they get out of prison. When Andy has crawled through the tunnel he dug, then through the sewers, and finally landed in cold water in the pouring night, he is free. Different from when his friend is let out, Andy raises his hands to the sky, ripping his shirt, feeling the rain fall onto his skin; he is free without guilt for he was innocent. His whole expression is not filled with fear, instead it is peace and freedom; a redemption.

To me, there is no doubt that this movie deserves the position it has over on IMDB. It has everything; well made characters, a story with a message, and a great composition.

Space is a place, or a void, that has fascinated us humans for as long as dated history. The
…

A Book Review of 'The Art of Hearing Heart Beats'