A game that creates a completely new category for the war game genre. There are no kill streaks, no kill counts, and no re-spawns. This is war seen from the most affected ones, the civilians. Even if you’re not a gamer, this game is worth your time.

This War of Mine is a PC game that sets a whole new perspective for how we see war, especially in video games where war is often seen from the soldier’s perspective with over realistic explosions and gunfire. But in this game there’s nothing like that! Here it’s seen from the civilian’s view. In which they have to survive starvation, depression, and other civilians — as well as the brutal military that should defend them, and many more horrors.

In this review I’m going to look at This War of Mine from two perspectives, a gamer perspective and a meaning perspective, since it is a game with such a deep moral tone.

Many reviews of this game say that the game tests your morality. I would say this is correct to some extent, but it’s more of a moral decision-making game were you have to make quick decisions which could either result in your character’s death or someone else’s death. (not players, it is single-player).

Although, you have multiple chances since you don’t play as just one character, you often play as at least two. The more characters, the easier it gets, sometimes… You have multiple people to perform the work that needs to be done but you also have to take care of them. They can get sick, wounded, hungry, depressed, and so on. Which all have to be dealt with or they might result in death.

The game is divided into two phases, day and night. During the day you fix your shelter (which is a bombed house). In the shelter many tasks can be performed, such as crafting, cooking, resting, gathering water, and so on. Sometimes a trader comes around as well, so don’t end the day early and get into the night. Speaking of the night, that is the second phase. During that time you select which ones should guard, sleep, and scavenge. You can only have one character scavenging each night and I highly recommend one is sent out every night to get at least some resources to use for crafting weapons, medicine, and more.

Once a cycle has been completed a new day begins. By day 30+ I had lost all my characters except one. But then something game changing happened, (spoiler alert) the game ended. 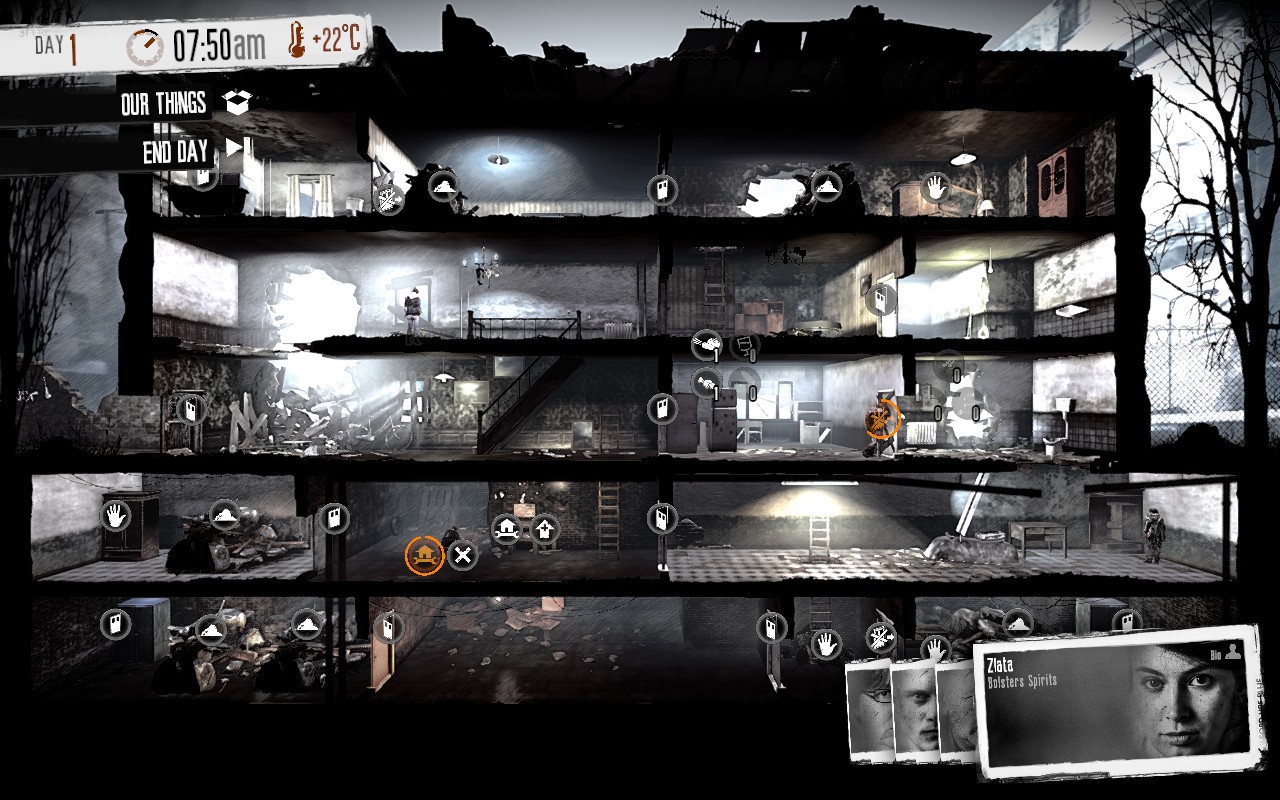 As you can see on the image above it is a point-and-click side-scroller. Because of this it is more difficult, at least for me, to get into the story and get to know the characters. But after a few in-game days I had gotten to know them and read the short back story about them, which helped a lot. 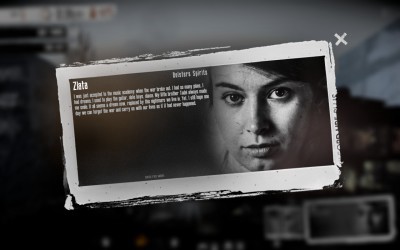 That was when I reached around day four and I started to play more from a moral level. Instead of just thinking of survival I thought about the morality of my decision.

At this stage the game’s quality improved by a lot. An example of this was when I were out scavenging in a building which had 3 survivors living in it, 2 men and one older lady. I had a shotgun with 10 shells and I was in dire need of food and medicine. My only intention was to steal (which is bad in its self) the resources I needed. But one of the men saw me and pulled a gun, my only choice was to kill, or be killed. So I shot him.

The other man ran up the building with a gun, so I shot him too. Same scenario again, kill or be killed. Then when I continued to scavenge the building in panic the old lady started to yell about where her friends was. I panicked with the thought that she might have a gun, I feared for my character’s life, so I shot her as well. Even if this was all just in a video game I felt horrible, three innocent people had died.

I actually didn’t realize, before I played this game, that war actually forces you to do these things to survive. I knew it was bad but not just how bad.

How will you get food when people have raided the supermarkets? How will you get medicine when people have plundered with the pharmacy? Not only does war war create starvation and sickness, it also creates giant trust issues between groups of innocent people which might result in a body count on both sides. In this game you can truly understand those horrors of war that are going on around our very real world.

This was an incredible game to play, I’ve played it for around 22 hours and every minute of it was a great experience filled with emotions, story, and excitement.

Authors Note This is a fictional story. The only non-fictional part if it is the earthquake itself. Any similarities
…